The Land of Mist picks up some of the characters who discovered an island full of prehistoric creatures in Conan Doyle’s The Lost World, and sets them exploring the even stranger world of ghosts and spirits.
For the later decades of his life, Conan Doyle was an enthusiastic spiritualist, and a great propagandist for the cause. He had the sense to keep Sherlock Holmes well away from his supernatural interests, but in this book Professor Challenger and company face all sorts of ethereal wonders, and, I’m afraid, all end up as enthusiastic spokespersons for the author.
The book begins well, with the journalist Malone attending a spiritualist service for the sake of a newspaper article. The event is described objectively, in all its oddity, and there is an interesting description of  its attentive, mostly lower-middle class congregation:

People who are in earnest are always interesting, whether you agree with them or not, and it was impossible to doubt that these people were extremely earnest. The hall was crammed, and as one looked down one saw line after line of upturned faces, curiously alike in type, women predominating, but men running them close. That type was not distinguished nor intellectual, but it was undeniably healthy, honest and sane. Small trades-folk, male and female shopwalkers, better class artisans, lower middle-class women worn with household cares, occasional young folk in search of a sensation.

Some of the speakers seem unhinged; one brings messages from Atlantis, and another announces the Second Coming, but the audience have really come to hear the mediums, who offer messages from beyond – mostly rather unspecific, but they generally satisfy the listeners, because they give the sense of contact with a loved one who died. Malone is given a message that just might have come from a fellow-member of Challenger’s team, but he remains sceptical.
He is, however, interested enough to explore further, and he is taken to further events. These are not tame public events like the spiritualist service, but full-blown seances where ectoplasmic ghosts materialise themselves spectacularly. He becomes increasingly less sceptical.
The action hots up when Challenger’s old colleague, the big-game hunter Lord John Roxton, ‘a man of resolute character and one of the best revolver shots in England’ takes up the challenge to spend a night in the most haunted house in England. He is accompanied by Malone and by a tough-minded clergyman, the Reverend Charles Mason. The manifestation is suitably terrifying:

What was it? They could not tell themselves. They only knew that the black shadows at the top of the staircase had thickened, had coalesced, had taken a definite, batlike shape. Great God! They were moving! They were rushing swiftly and noiselessly downwards! Black, black as night, huge, ill-defined, semi-human and altogether evil and damnable. All three men screamed and blundered for the door. Lord Roxton caught the handle and threw it open. It was too late; the thing was upon them. They were conscious of a warm, glutinous contact, of a purulent smell, of a half-formed, dreadful face and of entwining limbs. An instant later all three were lying half-dazed and horrified, hurled outwards on to the gravel of the drive. The door had shut with a crash.

They are hurled out of the house, but the clergyman draws his crucifix out of his pocket and determines to go back in. After a suspenseful while, he returns:

His face looked ghastly in the moonlight, but his manner was brisk and happy.

He has spoken to the troubled and unhappy spirit, and has offered it the hope of religion. He says that the house will no longer be haunted.
The next chapter develops the theme of unhappy earth-bound spirits. Malone and Reverend mason attend a séance where they make contact with some of them. The medium makes contact with Chang, a Chinese spirit control who explains how the afterlife works:

Seven spheres round the world, heaviest below, lightest above. First sphere is on the earth. These people belong to that sphere. Each sphere is separate from the other. Therefore it is easier for you to speak with these people than for those in any other.

.Spirits who cannot escape from the troubles of earth stay on the lowest sphere. Most of the spirits whose messages are brought back by mediums are from the third sphere (‘Summerland’). The highest sphere is the seventh heaven. Chang explains:

‘Ah! That is where the Christs are. All come there at last —you, me, everybody.’

The clergyman makes contact with various earthbound spirits, and helps them. The one that struck me most was the sailor who was killed when HMS Monmouth was sunk in the Battle of Coronel in November 1914. He is surprised to hear that he is dead, and is told that he must get beyond his resentment of the Germans who sank his ship if he is to rise. He takes the news very positively.
There are plenty more adventures – including the unmasking of an obvious fraud, and a trip to Paris to see a scientist who conducts psychic experiments in his laboratory, including the materialisation of strange beasts:

The animal smell became more pronounced. It was overpowering. Then suddenly Malone became conscious of something moving round the table. In the dim red light he was aware of a mis-shapen figure, crouching, ill-formed, with some resemblance to man. He silhouetted it against the dull radiance. It was bulky, broad, with a bullet-head, a short neck, heavy, clumsy shoulders. It slouched slowly round the circle.

This is the ghost of  Pithecanthropus, an ancestor of early man.
The whole book has been leading up to the confrontation between the spiritualists and the ultra-sceptical Professor Challenger, who has been a scornful presence on the sidelines up till now. (His daughter, Enid, is engaged to Malone.) The climax comes, and I’m probably not revealing a spoiler if I tell you that Challenger is utterly convinced. The ending looks forward to a future when the spiritual will conquer mere materialism and psychic truth will triumph. There are several appendices to assure the reader that the strange events described in the story have equivalents in actuality.
And that is the problem with the book. Taken as a ghostly thriller, it’s OK– a bit plodding at times, but with enough action and suspense to keep you reading. But one can’t help remembering that Conan Doyle seems actually to have believed all this stuff. He was immensely credulous, and even fell for the Cottingley fairies). Knowing this really did spoil my pleasure in the book. 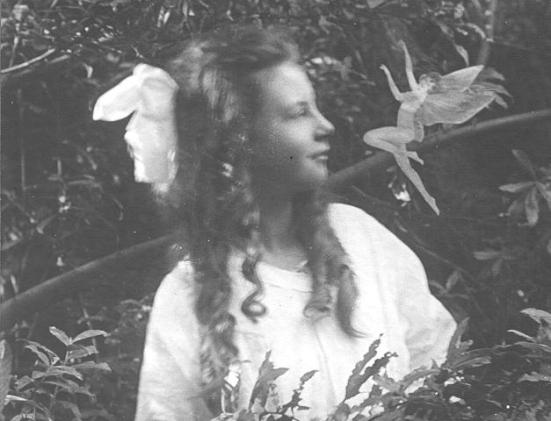 One of the photos of fairies, faked by two young cousins, Frances Griffith and Elsie Wright, in 1920. Doyle was among the spiritualists who accepted the photographs as proof of the existence of spirits. His article in The Strand Magazine for December 1920 argues passionately for the photographs’ genuineness. In fact, the two girls had (rather skilfully) cut fairy pictures from an annual, and posed them against real-life scenes.