Lieutenant Hornblower was published by Michael Joseph in 1952 but I read the 1957 Great Pan paperback edition which has a very dramatic front cover. The film, Captain Horatio Hornblower, starring Gregory Peck, came out in 1951. 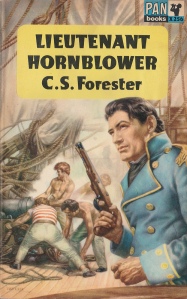 Lieutenant Hornblower is one of the later novels which fills in the story of Hornblower’s early years of naval service.  It sets the scene for his first meeting with William Bush, who became a lifelong friend, and it is Bush who is the narrator.  Bush and Hornblower are both junior officers on the Renown but life is even harder than usual at sea as their captain, Captain Sawyer, is a paranoid bully.  He is suspicious of all his officers, thinks everyone is conspiring behind his back and keeps meting out unjustly severe punishments to the point of being sadistic.  When he ‘accidently’ ends up at the bottom of a hatchway and is no longer fit to be in command, the indecisive first lieutenant, Buckland, has to take over.  This paves the way for the ambitious Hornblower to show his mettle, ‘The eagerness in Hornblower’s expression was obvious.  If ever a man yearned for an independent command and the consequent opportunity to distinguish himself it was Hornblower’ – (p 64).

Most of the action – storming a Spanish fort, capturing three privateers, putting down a break out of Spanish prisoners – takes place in Santo Domingo (modern Haiti) and does indeed give Hornblower the opportunity to distinguish himself.  At the start of the novel he is the most junior lieutenant; by the close of his adventures, he has been appointed to the command of a small ship.  And then peace is declared . . .

The section on what happened to the navy when the country was no longer at war was of considerable interest; nine out of ten ships were decommissioned and, if they didn’t have powerful friends to find them a post, the officers had to make do on half pay.  Because Hornblower’s appointment had not been ratified, he finds himself having to pay back the additional wages he had received which meant he had absolutely nothing to live on for six months.  Forester effectively contrasts the heat and brilliant successes in the tropics with the cold, inaction and despondency of winter in Portsmouth.  The encounters no longer involve canon and musket but whist at which Hornblower, of course, excels. His games sometimes involved making a fourth with some very senior naval officers which means that he was conveniently in the right place to secure a command at the start of the Napoleonic Wars.

Whilst lodging in Portsmouth, Hornblower also first meets Maria, his landlady’s daughter, who will become his first wife.  There’s an amusing moment when he is tackled by the two women, ‘The man who could keep a cool head when playing for high stakes with admirals – the man who fired the broadside that shook the Renown off the mud when under the fire of red-hot shot – was helpless when confronted by a couple of women’ – (p 277).  The treatment of the romantic element seemed to me rather weak.   All the naval technical detail is much more convincing.

The strengths of the novel, on the other hand, are its careful analysis of good and bad leadership and the way in which Forester, through Bush, builds up a character portrait of Hornblower.  Although he successfully hides his shortcomings and the reader never gets inside his head – ‘His smile gave no clue at all regarding his thoughts’ – (p 72) or ‘Hornblower worked as hard to conceal his human weaknesses as some men worked to conceal ignoble birth’ – (p 269) – it seems that, as well as being ambitious, he is arrogant – ‘Hornblower swallowed the realisation that it was possible for a man not to be able to continue from that point with a single leap of his imagination’ – (p 105), proud – ‘the dignified Hornblower who was ashamed of ever appearing human would hardly feel at home among people who knew that he had been human enough to be in debt’ – (p 277) and over-confident – ‘Bush had experienced more than one moment of pique at Hornblower’s invariable bold assumption of responsibility’ – (p 148).  In many ways Hornblower is essentially too perfect to be believeable. He must also have been a most annoying person to have to work with as he is always proved right!  As one senior naval officer wryly comments, ‘You seem to have thought of everything, Mr Hornblower’ – (p 219).

Bush is the perfect foil to Hornblower.  He is not a strategist and is rather unimaginative but he is also very steady, conscientious and a good seaman.  He is uncertain at first about Hornblower’s abilities and intentions but comes to recognise that he has the qualities that really matter for leadership in a fighting navy – ‘a bold and yet thoughtful initiative, moral as well as physical courage, tactful handling both of superiors and of subordinates, ingenuity and quickness of thought’ – (p 227).  Hornblower and Bush make a good team.

I did skip read some of the battles scenes and technical detail of fighting sailing ships but found I enjoyed the book more than I had expected.  I haven’t read any other Hornblower novels so wasn’t able to make any comparisons but have seen comments to the effect that it is interesting to see Hornblower through someone else’s eyes.  Forester is good at evoking the harshness of naval life and discipline and his knowledge of how sailing ships work and his technical grasp of the detail of naval warfare are very evident in this book.

One thought on “Lieutenant Hornblower (1952) by C.S. Forester”