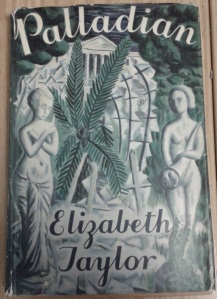 Here’s the rather lovely cover of the first edition of Palladian (very kindly given to me by Nicolas Hawkes). It was ‘produced in conformity with the authorised economy standards’ but still looks great. I think Palladian is a fascinating novel and wrote about it in Comedy and the Feminine Middlebrow Novel: Elizabeth von Arnim and Elizabeth Taylor. (Academic books and their catchy titles, eh?)

Helen has written an insightful review and it was a pleasure to hear her talk about the book at the reading group.

I always enjoy reading Elizabeth Taylor. There is a particular pleasure in immersing oneself in the delicate precision of her descriptions and the rueful melancholy of the lives she writes about. This is her second book and a very individual one, taking place in a now almost forgotten world.

This story begins with a bereavement, Cassandra Dashwood is first discovered in the house she is about to leave after the death of her father. She is now an orphan and has to make a new life for herself. She is a child of that period in time when young women learnt as much about life from Literature as from experience and because she has been found a position as a governess, “She was setting out with nothing to commend her to such a profession, beyond the fact of her school lessons being still fresh in her mind and along with that, a very proper willingness to fall in love, the more despairingly the better, with her employer.”

She arrives at Cropthorne Manor which is a decaying house in the country, being met by Margaret, a cousin of her employer, who is staying at the house while waiting to have a baby. She is introduced to the house though her employer, Marion is in his room with neuralgia. He is also bereaved, though the loss happened when his wife, Violet, died at the time of Sophie’s birth. She meets her pupil Sophie and immediately has to deal with a crisis – Sophie has a cat which is very ill and which she wants saved but this is impossible and Margaret’s brother Tom puts it to sleep (he was once a doctor, but is now an alcoholic).

Gradually Cassandra is enfolded by the household, Marion gives her lessons in Greek and teaches her to write it, while she struggles to teach Sophie the basics of mathematics and French. Meanwhile Tom is having an affair with the publican’s wife and drinking too much, Sophie’s old Nanny lords it over Mrs. Adams who does most of the work, Margaret’s mother fusses over her daughter and although everybody is under the same roof there is a feeling that they are powerless to help each other. There is an inevitability about what happens, just as the weather which colours the whole atmosphere of the house cannot be changed or avoided.

When Sophie is killed by part of a crumbling garden ornament crushing her, it is hardly surprising when Tom reveals to Marion that he was Sophie’s father and that her mother Violet was always in love with him. The deception and sadness seem to be part of the very fabric of the old and decaying house.

Cassandra has left after Sophie’s funeral and Marion goes to find her. He proposes to her.

“when I thought about it, it seemed that all I had to give you was stale and complicated, that you were too young to drawn into my life, and that disheartening house, so ramshackle and remote – the other night the conservatory fell in.”

But in spite of this Cassandra accepts him and is optimistic enough to think that things will change. The book ends with Margaret being rushed to hospital to have her baby.

We hardly know if the marriage of Cassandra and Marion will change anything or whether she will be swallowed up by that sadness and inactivity. At the last moment a lop-sided hen wanders into the hallway and immediately retreats, escaping from the cold shadow into the sunshine.

This is a melancholy book and creates a particularly English world of old houses, shabby pubs and neglected gardens. It also carries with in it echoes of other writers, with names such as Cassandra Dashwood and Sophie Vanbrugh. The Nanny, altering the positions of Violet’s photograph in Marion’s bedroom, reminds us of Mrs Danvers in Rebecca with her loyalty to the dead first wife.. It reflects a time of change, when there were still servants in large houses, most journeys were by train and before television, people lived within their own small and very individual worlds. It is always a delight to dwell on Elizabeth Taylor’s writing, so pared down and delicately accurate in her portrayal of people and places. Reading her is like enjoying a very good chamber music concert.